Today, one more time, thousands of people participated in a mass civil disobedience action to occupy (and therefore stop) the coal mine of Hambach. The pit is located 50 kilometers from Bonn, where the COP23 talks are currently taking place. What a symbol! 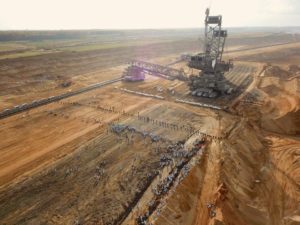 Once again, the activists are receiving support from locals and we can feel there is a lot a respect for their repeated action. Every year more participants (and police) join… But how many of those actions do we need to close those mines? Is any world leader paying attention to what is going on outside of the fancy conference centres? If you look at the results of 25 years of international climate talks, it is difficult to remain optimistic about the whole process. Indeed, the Trump team has recently announced that it would promote fossil fuel at the COP23! And on a different, yet very related topic, agriculture is still missing from those conferences. Let’s see what is going to happen in the next two weeks…

COP’s have positive sides too, since they are the opportunity for organisations, groups and people to meet up and mobilise: yesterday, on Saturday Nov. 4th, more than 20.000 people took the streets in Bonn to demand climate justice, refuse green capitalism and say no to fossil fuels. 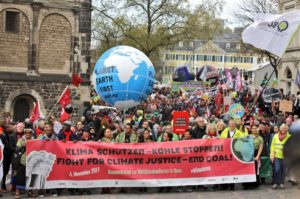 It seems that the security level around the conference area is way higher than at the previous COP’s. The roads are all checked by security guards and police is everywhere. So far in the registration area, we have as many security people participants.

About meat and dairy: Bonn appetit!

ASEED has been involved in many climate COPs. Ironically, we can be “green” and reuse materials because most problems are far from being solved. For example, we have updated an eight year-old article about the greenhouse gases emissions related to 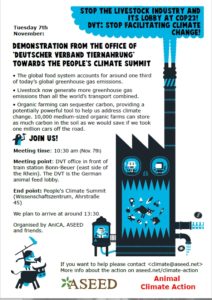 meat and dairy production. It is of course still worth reading. Some figures are probably obvious for those who are familiar with the role of animal agriculture in climate change, but some information is less known.

This article contains very useful information to spread before and during the demonstration planned next Tuesday. It will start from the office of the German animal feed lobby ‘Deutscher Verband Tiernahrung’. Together with the German group Animal Climate Action (AniCA), ASEED and protesters will gather to denounce the role of the livestock industry and its lobby on climate change. The meet-up is at 10:30am at the DVT office in front of the station Bonn-Beuel on the East side of the Rhine. We will end at the People’s Climate Summit around 13:30, after passing the COP23 area.

Find more information about the demonstration here and look at the extensive programme of the People’s Climate Summit online.