It was an unprecedented international mobilization that enabled five eminent judges to hear testimonies from victims coming from all around the world, in order to examine the consequences of the activities of the multinational agrochemical company Monsanto in the light of international law.

The Tribunal is to deliver a legal opinion on questions related to:

The advisory legal opinion will be delivered on April 18th 2017 instead of in December 2016 as it was initially planned. Because of the complexity of the questions and the extent of the gathered testimonies, the deliberations and writing of the opinion required several months of work.

THE MONSANTO TRIBUNAL: CONTRIBUTING TO THE DEVELOPMENT OF INTERNATIONAL LAW

The goal of the Monsanto Tribunal is to evaluate whether or not Monsanto’s activities are complying with international law. Through the case of Monsanto, the Tribunal considers an example of a multinational corporation whose behavior ignores the damages their decisions cause to health, environment and scientific independence.

This question is of utmost necessity to ensure the law also progresses at regional and national levels. The Tribunal therefore follows the UN Guiding Principles on Business and Human Rights, adopted by the Council of the UN Human Rights June 2011 and the Rome Statute establishing the International Criminal Court (ICC).

«This Tribunal raises questions whose stakes are global. With this trial we hope to be able to make recommendations to the ICC and to evolve the law to put an end to those corporations’ impunity regarding the global environmental damages they are responsible for.» Declaration of the Monsanto Tribunal Organizing Committee.

The aim of the Tribunal is to give a legal opinion on the environmental and health damage caused by the multinational Monsanto. This process will use existing international law but also contribute to the international debate to include the crime of ecocide into international criminal law. It will also give people all over the world a well documented legal file to be used in lawsuits against Monsanto and similar chemical companies.

The various testimonies, experts’ and scientists’ contributions provided the judges with very dense information to process. In order to do exhaustive and thorough work that will be useful to civil society and to make international law progress, the Judges needed extra time to deliver their legal opinion. The will give a public presentation of their conclusions on April 18th in The Hague. The event will be livestreamed in English, French, Spanish and German on the main page of Monsanto Tribunal website.

Conclusion of Judge Tulkens, former Vice-President of the European Court of Human Rights and Chair of the Monsanto Tribunal:

“[The legal opinion] will be addressed to Monsanto and to the United Nations. From this legal opinion, other jurisdictions can be involved and more judges will step in. We, as the judges [at the Monsanto Tribunal] have seen, heard, noted and deliberated. Chances are that the international law will take into consideration new issues such as the ones related to ecocide.” 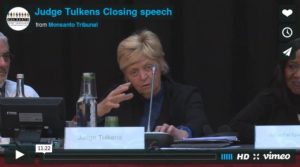 Click on the picture to watch Judge Tulkens’ closing speech