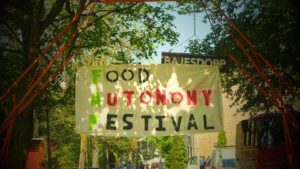 On Saturday May 6, the sun decided to make an appearance for the Food Autonomy Festival. As well as being thankful for the good weather, we would also like to say a big thank you to the volunteers, speakers, collectives, workshop facilitators, moderators, cooks, choppers, bar folk, seed-swappers, musicians, and everyone else who came along and participated. A particularly big thank you also to those living at Bajesdorp for hosting us and making FAF possible! 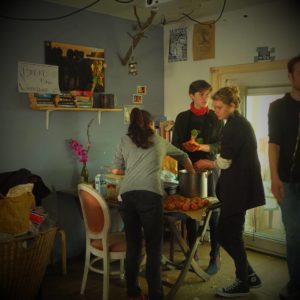 The day began with lunch from Taste Before You Waste and a small workshop on making sweet and savoury bread balls from stale bread. CityPlot ran a stand and provided materials and instructions for people to make their own seed bombs. The first discussion, Workers, Migrants, and Food began at 1pm with Dirk talking about the shameful treatment of undocumented migrants in Greece and the role of autonomous cooking collectives in comparison to state agencies and ¨humanitarian¨ organisations. Giulio (De Roede Pollepels) and Michel (De Vrije Bond) focused on the ways the industrial food system exploits its most vulnerable workers and ways to organise against this, with a focus on Italy and the Netherlands. 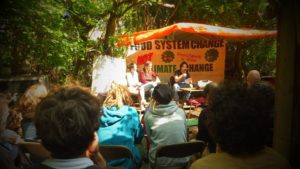 Shortly after, Sylvia (Transnational Institute), Jildou (Toekomstboeren), Georges (WUR) and Fernando (SMX Collective) discussed the growth of the food sovereignty movement in Europe, the politics of agroecology, and the dangers of co-optation of each by capitalist forces in the session on Food Sovereignty and Agroecology.

Around this time, an urban foraging plant walk group left the Bajedorp for a wander in the surrounding area to see what edibles and other useful plants could be found. 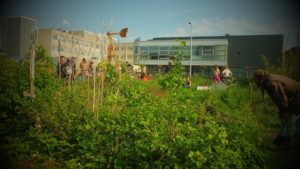 Meanwhile, out in the Gardens, Simon from Grow Heathrow gave a workshop on composting and bokashi composting (anaerobic fermentation) which was followed by KasKantine´s workshop on constructing semi-portable, elevated strawbale gardens for growing easily in an urban (concrete) environment.

Back in the Backyard, the Collective Farming and Land Struggles discussion was facilitated by Flip (ASEED) and had contributions from ROD (Radical Allotment Gardens, Warsaw), Simon and Rich (Grow Heathrow, England), La Terre des Louves (France), and Transfarmers (NL). The session covered varying approaches for accessing land and ways to use it for greater community self-sufficiency and strategically for particular political goals.

Code Rood gave a presentation inside de Muiterij on the mass civil disobedience action planned in the Amsterdam harbour for the 24th June whilst Menno (KasKantine) gave a practical talk on System Unplugging- how to become less dependent on capitalist agriculture and the energy grid in an urban environment. 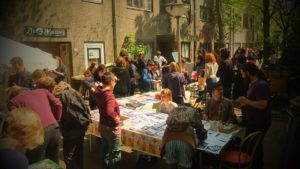 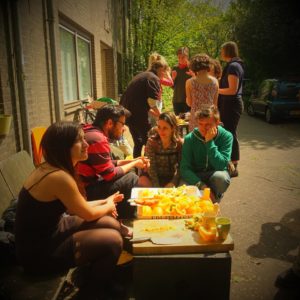 After a dinner prepared by Guerrilla Kitchen (who coped admirably with the greater numbers than we anticipated), Trikosis took to the stage outside de Muiterij with an explosive show despite their empty stomachs! Shitfaced Mermaids, all 10 or so, then came on in their drunken semi-fishy manner as the sun began to set. And as the night drew to a close, Nono and the Sinking Ship kept the energy going with another frantic, fun performance.

Thank you to all the bands, for a food revolution without dancing is not a revolution worth having.

We think FAF has shown that there is an appetite (so to speak…) for food and agriculture to be treated for what it is- a political issue at the heart of questions over social, economic, and ecological justice. Food is not simply a matter of personal morality or conscious consumerism; given the destructive power of the industrial food system for the climate, ecologies, animals, and people, the problem is much more serious than this. As such, the problems require collective engagement focused on reclaiming our autonomy, materially in the form of the land and resources necessary for growing food, and politically with the space to self-organize and resist the destructive forces of state capitalism. 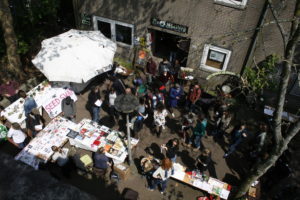