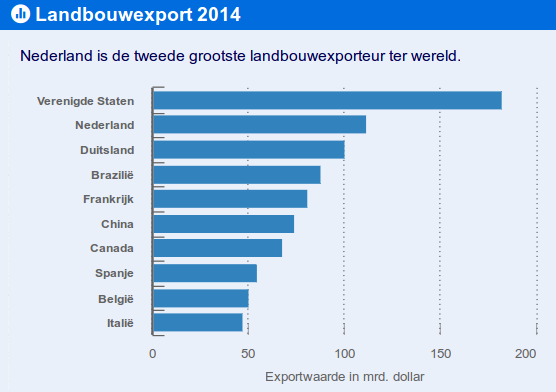 Despite being incapable of providing for their own population in a sustainable manner, the Netherlands is the second largest agricultural exporter after the US. Germany comes third, followed by Brazil and France. 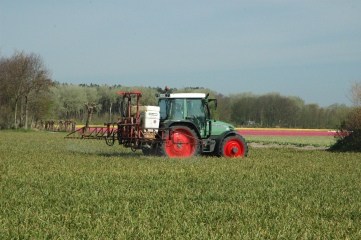 There is a lot to note about the products that contribute most to this export surplus. Since the flower industry uses the most pesticides per hectare, it contributes significantly to the contamination of surface – and groundwater in the Netherlands. The production of meat, milk and other dairy products is very inefficient, depends on soy imports and contributes excessively to climate change. Many of the exported vegetables come from heated greenhouses that are only profitable due to subsidised gas. The top ten are, furthermore, comprised of beverages, animal feed, cacao and cacao produce, fruit, vegetable and fruit produce, grain produce, flour and milk. As for the last category, it mainly concerns baby milk powder, which is still supplanting the more healthy and sustainable breast milk in many parts of the world.
More than half, i.e. 55 percent of the Dutch produce surplus was generated due to trade in agricultural goods. Last year the agricultural surplus amounted to 26,1 billion Euro, while the overall goods surplus amounted to 47,5 billion Euro. The transportation of this surplus frequently requires refrigeration, which cost a lot of energy.

As a percentage the agricultural surplus grows very little, since the significance of other goods, such as machinery and chemical products, has increased more within the trade surplus. It is thus not only with respect to agriculture that the Netherlands score an insufficient for sustainability. 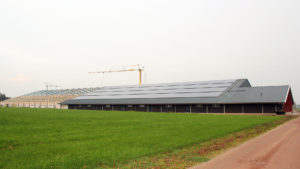 The largest trade deficits in the agricultural sector are found in grain and oilseeds, which are both used in the animal feed industry. Besides that, deficits mainly concern fruit, coffee, tea and spices.

In addition to the problems this trade surplus causes in the Netherlands, it is also detrimental to food industries in other countries. Local agriculture is supplanted or forced to adapt to Dutch industrial farming methods. Especially bigger companies profit from the growing import and export. They enlarge their power position in the sector, since they are the ones making profit.

So far Marcel van Dam, the State Secretary for Infrastructure and Environment, has not indicated how he intends to tackle the urgent problem of Dutch agricultural exports.