Between the 20th and 28th of October, two ASEED’ers travelled to Strasbourg, France, to take part in a study session on youth activism. Direct action has been prominent in the work of ASEED in previous months, between the Lutkemeer actions, Free the Soil and holding discussions around the topic of direct action strategies and tactics. Therefore, this study session came at a perfect time, allowing us to dive deeper into our own activism and how it fits into a European context. 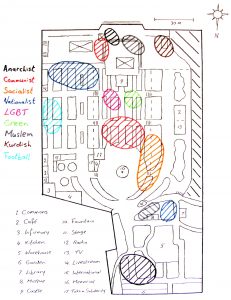 The week long session was organised by the Federation of Young European Greens (FYEG) and titled: “Actions Speak Louder Than Words – Youth Engagement, Grassroots Activism and the Future of Democracy”. FYEG are an umbrella organisation for all youth groups working in the area of green activism from all around Europe. The aim of these events is to connect groups working on similar struggles from east to west, and from north to south.

The week started with getting to know each other and delving into mass movements of the past 30 years, such as the Gezi protests, The Environmental Liberation Front (ELF), the Battle of Seattle and many more. The Gezi protests started in the Taksim Gezi Park, Istanbul in 2013 when it was threatened by new urban development plans. To hear stories from people who had experienced it first-hand, allowed participants to ask deeper questions about how this movement connected to the wider socio-political context Turkey at the time. From looking at the map on the right you can see what began as a protest to save a park in Istanbul, grew into a permanent camp where many different groups came together to protect a communal space threatened with destruction.

Going forward from this historical perspective, more conceptual and ‘present day’ workshops took place. The topics included institutional politics, neo-colonialism and post USSR societies. The latter was the most profound to us. It was a panel discussion in which thirteen participants from eastern Europe were given space to explain how this history affects their society today. Many of the expected effects were common throughout
all countries such as architectural evidence, old soviet style statues, and

Russian still being a widely spoken language. However, there were also quite specific effects in each of the countries.

Participants from Georgia spoke about how it is hard to advocate for socialism nowadays, as many people can’t detach it from totalitarianism due to the experience under Stalin. It was clear this experience had defined the perception of socialism for many people within post-soviet countries – whether that be a positive or negative perception. Others spoke of the positives of the soviet era, most prominently the freedom of movement for all classes within the USSR. It was stated that it is now very difficult and expensive to travel to Moscow for people without much disposable income from Azerbaijan for example. Additionally, with conflicts existing between some post-soviet countries this still limits movement of people today. In eastern Germany, it was stated that the hardship experienced after unification can sometimes be used as a justification for anti-refugee rhetoric.

One of the other important things to bring forward from the talks about activism in post-USSR countries and Turkey is how different the circumstances are for activism throughout Europe. Access to rights are very differentiated from country to country, for example how police use violence to quell protest. It was evident from this that there is an imbalance of what kind of activism we can do in countries such as the Netherlands without risking long term imprisonment or severe violent attacks from the police compared to other countries, such as Turkey, where demonstrations are quickly shut down. That said, this lack of right to assemble is of course present in the Netherlands, most notable with the current kick-out zwarte piet demonstrations.

Moving on from experiences of activism on the country level, we came back to the individual. We talked about the different motives that drive young people to engage with activism. One workshop was specifically designed to open this discussion. During the workshop we had to explore in what way different identity markers were driving or limiting our activism. This was done by walking around a room in which different categories had been marked out on the floor, such as: religion, gender, age, ethnicity, class, sexuality and nationality. It was quite profound for everyone to realise how everyone in the workshop had such varying different starting points for their activism. This fed into a larger debate regarding privileges and their connection to our activism.

The workshop braided itself into the talks about mental health later in the week. Because it would show that the ways we react to the activism we do, is related with why we do activism.

One of the last sessions we took part in was on activism and mental health. Something we tend to neglect within our activist groups which often leads to burn outs. It turned out to be very emotional for the whole group. First, we individually had to reflect on how we connect mental health with our own activism, it gave a variety of aspects on our mental health concerns. After this we continued the discussion in smaller groups, where we also had to come up with solutions and different forms of support systems that we can make in activist groups. Some of the suggestions where:

Overall, it was a week full of listening and learning. What we have written above is only a small part of all the activities and workshops we experienced through the study session. Most prominently, connecting with activists across Europe and the world proved how much we can always learn from each other. 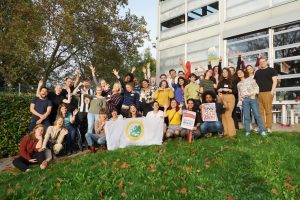