[update: On March 7 an action took place to try to convince the local politicians. Three tractors and a group of Boterbloem supporters with pitchforks and other farm tools went to the town hall for a strong and clear demonstration. And it is election time in Amsterdam. The Green Left seems to be in favour or the Boterbloem. Some other politicians are open for alternatives but warn that this will cost money. More reports, pictures and updates on https://reddeboterbloem.wordpress.com/] 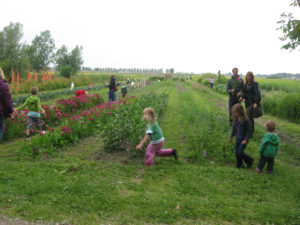 There is one farm still active on the west side of Amsterdam: de Boterbloem, where the family Hoogendam have grown food on the fertile clay ground for generations. This organic farm is now seriously threatened by SADC, a project developer that wants to turn the zone into a Schiphol business area.

The most surprising thing in this affair is that the SADC belongs among others to the Province Noord-Holland and the municipality of Amsterdam: both love to communicate about sustainability regarding anything they do. At the same time, Amsterdam tries to give itself a good image thanks to urban farming.

Even though the situation of de Boterbloem has been difficult for a while, it recently became more critical after a court ruling. The SADC’s interests may weigh heavier than those from the small organic farm. Indeed, de Boterbloem does not own the land. Very soon, a bailiff could deliver an eviction warrant to Trijntje, de Boterbloem farmer. Three days later, the SADC would be the owner of the area and therefore be able to dump sand on the certified organic fields of the farm.

This is not only about what is allowed to do or not, but about what we want. Do we want green spaces around the city, and local, sustainable food supply? Or do we want more businesses and a bigger airport? The municipalities of Amsterdam and Haarlemmermeer, and the Province Noord-Holland could also choose for a liveable, climate-friendly future for the region. The action comitee Red de Boterbloem (Save de Boterbloem) asks as many people as possible to voice their opinion towards the Amsterdam council. Give your opinion (without moderation!) on the website of de Boterbloem to give more strength and confidence to the defenders of the farm who will have to take action in the council!

You can also express your solidarity and show that you care for nature and the environment by joining a bike protest on Sunday, March 4. We will leave at 16:00 from De Fruittuin van West and cycle to de Boterbloem, where we will be welcomed by the Fanfare van de Eerste Liefdesnacht and farmer Trijntje. Bring protest signs and flags!

This bike protest tour will close the Reclaim the Seeds! weekend taking place on March 3 and 4 at the Fruittuin van West. Reclaim the Seeds! includes a seed fair and many workshops, but also a corner where to make your own protest flag or banner to show solidarity with the Boterbloem.