The flyers were well received by most visitors. During the discussion in the hall, most present research activists also concluded that there wasn’t much sustainability with the RSPO, a similar project for so-called sustainable palm oil. The pleasant examples that were given at times were an exception, misery the standard. For the observant listener, Unilever’s ‘sustainable’ claims did not hold up at all.

Below you can see the content of the flyer that was handed out:

March 31, 2017 – Agribusinesses and food companies such as Unilever are involved with a sequence of voluntary certification initiatives. One of the first, and definitely one of the most controversial, was the ‘Round Table for Responsible Soy’ (RTRS), where companies like Monsanto, Bayer, Syngenta, Unilever and Cargil sat around the table with a few NGOs like WWF and Solidaridad.. 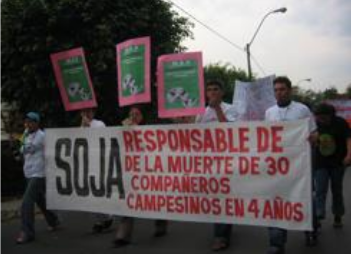 Hundreds of organizations from the entire world have publicly denounced the RTRS and the ‘responsible’ soy label multiple times. Over 26,000 people have requested Ahold and other supermarkets to not cooperate with ‘responsible’ but still wrong soy.

The large scale soy production in South America is in those countries a disaster for people and the environment. The main part of the soy is RoundupReady soy from Monsanto, which has been made resistant to large quantities of herbicide (Roundup) through genetic manipulation. This soy mainly serves as feed for the intensive livestock farming and as fuel for cars. This system is intrinsically unsustainable and no ‘responsible’ label will change that. Voluntary codes of conduct and certification are a tested lobby strategy of the corporate industry to create a green image and at the same time ward off binding rules.

The RTRS and the ‘responsible soy’ has led to no single improvement in the circumstances in soy areas:

The Dutch government finances the Round Table through the Initiative Sustainable Trade (IDH) and the organization Solidaridad. An amount of nine million euro of Dutch development money has been reserved just for the stimulation of RTRS certification itself. This money will go to soy producers and buying companies. It is channeled through to the Soy Fast Track Fund, which is managed by… Solidaridad, via the Institute Sustainable Trade (IDH).

Queried numbers show that € 165,000 of development money was paid to the foundation Fundacao Andre Maggi, affiliated to mega soy producer Grupo A Maggi. This company is run by Blairo Maggi, billionaire and now Minister of Agriculture in the government of the extreme right president Michel Temer. One-and-a-half ton went to projects involving Unilever.

In addition to this direct subsidies for large landowners in South America, participating companies like Unilever and Monsanto profit through their participation to the Round Table with a greener image, while they can continue with ‘business as usual’: a soy production which poisons people and the environment and would sooner deserve the stamp of ‘ecocide’.

Instead of supporting greenwash labels, investment should be made in sustainable agriculture here, which is not dependent on cheap RoundupReady soy import. Development organizations should focus on the support of the interests of farmer organizations in the south, not the soy producers. It is high time to pull the plug out of the misleading soy project.

1) RTRS website: “The RTRS cannot prevent the industry from expanding – such a task is far beyond what any voluntary initiative could achieve.”