After months of planning and preparing it has finally happened! The Free the Soil camp is here! And, with the help of the Theaterstraat bus collective, we have arrived. Some hours in the bus to talk about nitrogen, pears, pockets knifes, communities and recipes for vegan powerbars, to take naps and to write this first report.

The action camp near the German Brunsbüttel, North-West from Hamburg, is part of a climate justice campaign to free the soil from synthetic fertilisers, to regenerate the humus layer and to reduce emissions of greenhouse gasses by agriculture. 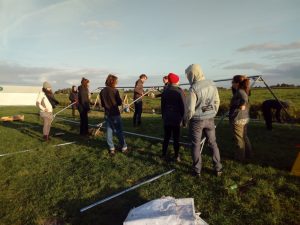 The past days preparing for the camp have been hectic. Not only did we have to collect all kinds of possibly useful tools, papers, fabric and other creative materials from our office, we also used the camp as a deadline for some articles that had been in progress for some time. We printed copies for the infotent and camp library but you can also read them online:

Yara, the company – A small brochure describing the activities and strategy of the largest nitrogen fertilizer company in the world. The action this coming Monday is going to take place at one of Yara’s plants. There is a version in German as well: Yara, der Konzern.

The Free the Soil Lexicon – A document explaining some terms relevant for the campaign, including translations of some nitrogenous terms in Dutch, German and English.

Disproving the arguments of the fertilizer industry – Yara and their lobby organisations are good at selling their activities. They use many arguments to explain why farmers needs their products and how they are saving the world. We took their most-used arguments and countered them. 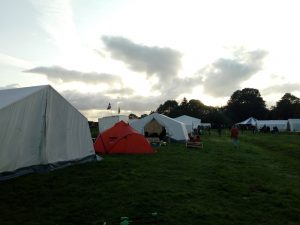 We arrived in a very structured camp setting. There is a huge tent for large meetings and discussions, several other tents for workshops, legal info, a bar, tools, a media team and more. We build the large tent that we could borough from We Are Here, thanks for that friends! The fields are flat, the grass is green, the views are wide and, not unimportant, action kitchen Le Sabot is cooking food! We feel at home!
Nearby, close to the Yara plant there is a welcoming team of 500 cops. What an honor.

Today in the bus we had some time to get to know each other. And we seem to be a nice bunch of motivated activists, many involved with food somehow, including people working on farms, cooks and students and researchers focussing on the social and environmental aspects of agriculture. We are looking forward to the interesting lectures and discussions [link] planned for the coming days. To be continued.