With the recent notice of the European Commission we have the chance to do this now! 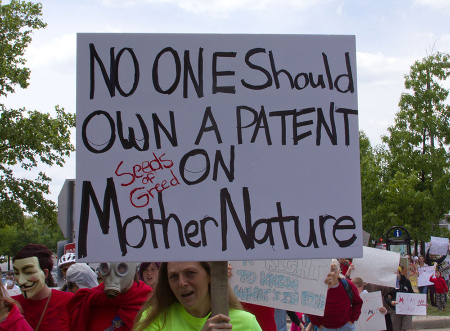 In the past years an increasingly number of patents on plants has been granted. Luckily, this development is not irreversible. As an answer on plenty of protests against patentability of plants and seeds, the European Commission published on Thursday 2nd November the announced notice on the interpretation of the current Biotech Directive 98/44/EC, clearly refraining from the current situation that made patents on plants from conventional breeding possible. With that they emphasized the fact that the European Law originally aimed to exclude conventional bred plants and animals from patentability. However, ‘we are not there, yet’, as Maaike Raaimakers from Bionext warns. What can we expect from this notice and what are the steps we should tackle now?

The European Patent Law includes a prohibition of patents on plants and animals. Despite this, there are plenty of patents pending at the moment, and some patents on plant material or animals from conventional breeding have already been approved. Those patent cases can affect the whole value chain of agricultural plants and are granted on different vegetables like Monsanto´s super-broccoli or Syngenta’s paprika and chili plant with resistance against insects. A lot of criticism and protest is going on against the current interpretation of the European Patent Law – with justification. In response, the Eurepean Commission recently published the notice on the Biotech Directive 98/44/EC. With their statement, the European Commission clearly refrained from the interpretation of the Enlarged Board of Appeal of the EPO.

On the 25th March of 2015, the Enlarged Board of Appeal of the EPO made the following unacceptable decision: ‘while processes for conventional breeding cannot be patented, plants and animals stemming from these processes are patentable.’ This decision made it possible to patent plants or seeds produced through conventional breeding, more than 180 have been granted already. On top of this, around 1.000 such patent applications are pending. The number is much higher when including genetically modified plants: more than 7.500 patents are pending at the moment. But the latter are not the issue of current discussions; their patentability will go on, in every case.

The most known examples of patents granted on plants of conventional breeding are the ‘broccoli’-patent (G 2/07) and the ‘tomato’-patent (G 1/08). Both of them became precedents for further decisions. 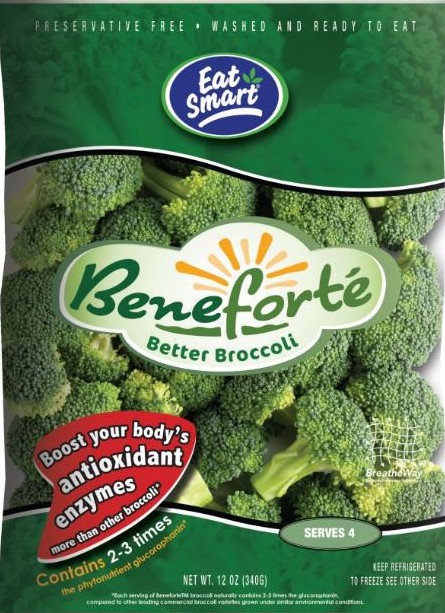 Monsanto´s ‘super-broccoli’ Beneforte: introduced in 2011 it is on the market in the US and the UK. The patent is on broccoli with a higher content of glucosinolates (which is believed to has health benefits) and was granted in 2002 by the EPO. The patented varieties stem from crossing wild broccoli plants with commercial varieties. The patent covers the plants, their seeds and the harvest. The EPO decided in 2010 that the breeding process has to be considered as ‘essential biological’ and with that is not patentable.

However, in 2015, they made the unacceptable and contradictory decision: the plant itself, the seeds and the harvested vegetables are patentable (see the decision of the Enlarged Board of Appeal in March 2015).

The same decision was made regarding to the ‘tomato’-patent, granted to the Israeli Ministry of Agriculture. Both decisions, the ‘broccoli’-case and the ‘tomato’-case, became precedents for further decisions. (see No Patents on Seeds report 2015: p. 20).

Patents are a risk to the accessibility of seeds and plants, especially heirloom varieties. Without preventing patents on seeds, the situation for traditional breeders and small scale farmers will become increasingly critical. They will increasingly fade into the background while the few big companies of the seed industry own and dominate the planet´s plant genetic resources.
Because the decision of the Enlarged Board of Appeal is legally binding for all the other decisions of the EPO, politicians should now become active and get a change in the interpretation of the European Patent Convention to strengthen the current prohibitions of the European Patent Law.

The absurdity of legislation

In the view of the European Patent Convention (EPC), the above explained interpretation seems to be absurd. It is contradictory and undermines the following paragraph.

The Article 53 b, EPC says:
‘Plant and animal varieties or essentially biological processes for production plants and animals’ are excluded from patentability1.

One could think this means a clear exclusion of patents on plants and animals. But if you look at the situation described, it´s clear that the law is not being interpreted as such. 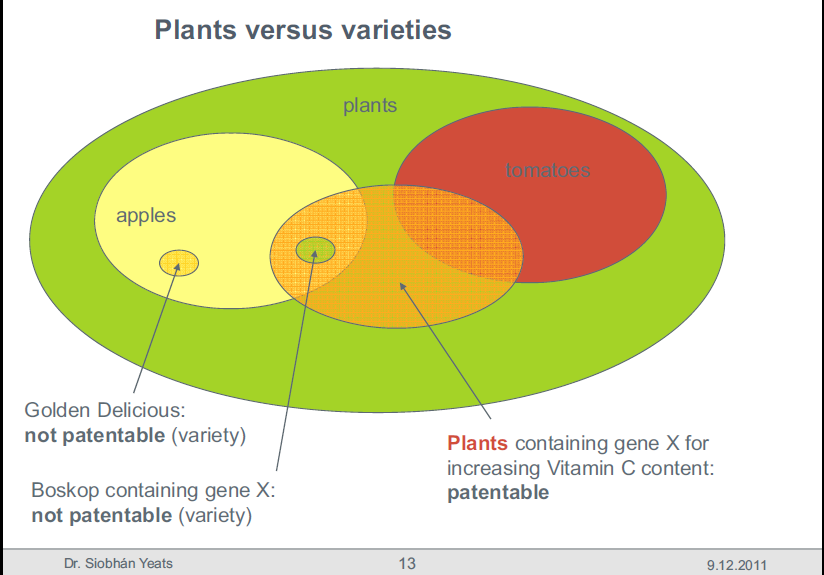 After the interpretation of the Enlarged Board of Appeal in 2015 the situation is even graver, as the chance to get a patent on plants or animals is bigger, the vaguer or more general the applications are formulated. That means, when one (mostly big companies) applies for a patent, one only has to be careful not to apply for a patent on a specific plant, but on special characteristics of plants.

This information graphic of the EPO (2011) shows that a specific sort of apple is not patentable, but that, in general plants with a gene increasing the Vitamin C content are. The absurd thing about this is that as a consequence, specific apple varieties, and even other plants, like in the case of tomatoes, are affected by such a decision and become patentable. And the more general the claims are the more probable is it that the patent will be granted.

The notice that was given by the EC on the 2nd of November is not legally binding. And it does not mean that there will be a decision by the EPO in this month. But it can be seen as a guideline for the EPO and the Member States, a sign of political will that raises hope. The next step will probably be the discussion of the interpretation rules of the European Patent Convention in the European Competitiveness Council in February. The aim has to be that those discussions result in a conclusion that everyone can be behind it: we want the responsible persons from the national governments to conclude with a clear NO to patents on seeds and animals and go with this statement into the Administrative Council of the EPO in March.

The role of national governments

National patent laws in the Netherlands and in Germany already prohibited patents on plants and animals in general. Even if those cannot affect decisions regarding to patents on a European level, they can strengthen the political decision of a country.
Now, after the published notice by the EC, it is important to continue lobbying and to influence the responsible ministers for the discussion of the European Competitiveness Council end of November and afterwards the votes of the specific national representatives (the EU Member States + the 10 other states) for the meeting of the Administrative Council in March.

Plant breeder´s rights vs. Patent rights
In the view of the fact that even the European governments are against patents on plants and animals from conventional breeding, there is a realistic chance for significant changes in the law.

The discussion is different in terms of plant breeder´s rights and the so-called breeder´s exemption. Breeder´s rights as another form of intellectual property rights allow only the exclusive rights for breeders to sell specific seeds, different to patent rights that can cover the breeding process and the products of a plant as well. While the ‘western’ governments see them as an alternative to patent rights, southern countries have a more radical view on seed sovereignty. In contrast to their absolute demand on seed freedom, breeder´s rights are in Europe in general seen as a good way to support breeders and to reward their efforts of breeding plant varieties for the market. The breeder´s exemption is seen as a sufficient step against monopolizing the seed markets and towards biodiversity, as it should guarantee breeders the possibility to use already registered varieties for further breeding.

Further reading:
More information on the definition of plant breeder´s rights on wikipedia.
About the discourse in the Netherlands see some videos
A more critical view on those issues in this booklet.

A new and clear legislation at the European level is unavoidable needed, and national governments can influence this as follows:

What can we do?

We can expect that that there is a realistic chance to change the interpretation in our favour. To do so could be an important step towards creating a clear legislation against patents on plants and animals, and with that on seeds, and make the existing prohibitions valid again. National governments have often taken a position against the patentability of plants and animals. According to a report of the KLB Münster, the EU Parliament as well as the German Federal Parliament spoke against the patentability of plants and animals. Also in the Netherlands, the voices in politics are against it. Following the news in May 2016, Martijn van Dam, state secretary of the Ministry of Economic Affairs, said the following regarding patentability (loosely translated):

‘As there is a patent pending on specific vegetables, other breeders are not able to develop this sort without paying for it. This harms the whole sector as well as the food supply.’

But to achieve a real change, we have to mobilize the Member States early enough to clearly oppose patents on plants and animals. For this, we have to make sure that the representatives of the Member States say NO to patents on plants and animals at the meeting of the Administrative Council in March, for the EU-Member States probably even earlier, if the topic will be discussed by the European Competitiveness Council on the 28th of November.
For the discussion on EU level, the responsible persons are:

For the discussion in the Administrative Council of the EPO, it depends on the country. Some delegates come from the ministries, some from the national patent offices (as they are more autonomous).  Sometimes they alternate, so it makes sense to influence both of them.

Further information and the prevailing representatives can be found here.

Direct steps to influence them can be:

Usually, the ministries that are dealing with patents are the Ministry for Justice, Economy or Innovation, but also the Ministry of Agriculture is involved.

In every case, the current seed legislation and the position of large food producers, traders, processors and retailers has already affected the agro-biodiversity and diversity of seeds in a negative way. In the view of that, seed saving becomes more and more important. To take action against this loss of diversity, you can become part of this movement. Come to Reclaim the Seeds 2017, taking place in Nijmegen on the 4th of March to exchange seeds, find heirloom varieties and share knowledge about them! More information about time, location and conditions can be found here: http://reclaimtheseeds.nl/index.php/english-home . Probably, on this date, there will be news about the developments of the Patent Law… we will keep you informed!