In a Press Release dated from Sept 19th, the Coalition against BAYER Dangers states:

« BAYER is going to take over MONSANTO for $ 66 billion, creating the largest agro-conglomerate in the world by far. Based on the financial figures of 2015, both companies combined reach a turnover of $ 23.1 billion. No one else from the sector can compete with that. The freshly married couples SYNGENTA/ChemChina and Dupont/Dow only make 14.8 and 14.6 billion, and BASF in the fourth place is far behind at 5.8 billion. Together, BAYER and MONSANTO reach a market share of just over 25 per cent for pesticides and just over 30 per cent for seeds for genetically manipulated and conventional arable crops. When only GM plants are considered, the two companies combined even reach far more 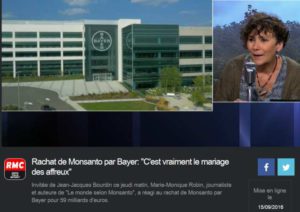 than 90 per cent, giving them a clear monopole position. »

This public announcement was not a total surprise since the merger talks between the two agrochemical giants were still going on until recently. However, that’s ironically the perfect timing for the Monsanto Tribunal to catch a lot of attention. In France for instance, many journalists directly went to the writer and director of The World according to Monsanto, Marie-Monique Robin, to get some explanations and comments about the merger. She described it as « The marriage of the villains ». Marie-Monique Robin is also the patron of the Monsanto Tribunal.
The Monsanto Tribunal organisers have of course reacted to the merger on social media. No long elaboration but a short and precise text about the implications for the Tribunal :

« Possible Bayer – Monsanto makes the Monsanto Tribunal even more important. The merger would lead to an even stronger concentration of power in the market of seeds and pesticides. Harmful to farmers, consumers and nature. The anti-trust regulators in the US and Europe will have to give green light for the merger and this process will take months or even a year. In the meantime the Monsanto Tribunal takes place in The Hague, October 14-16. This tribunal exposes the acts of Monsanto, but many of these acts are comparable to those by other agrochemical giants. The advisory opinion of the judges in the Tribunal will not only affect Monsanto but the agrochemical industry as a whole. And of course Bayer – once it is the legal owner of Monsanto – will be fully responsible for all acts committed by Monsanto. So yes, the Monsanto Tribunal will go ahead, full speed! »

Indeed, the programs of both the formal Tribunal and the parallel People’s Assembly are being finalised. The 5 Judges will hear 30 witnesses and experts from 5 continents during the 2-day trial. Meanwhile, farmers, scientists, unionists and activists from local to international movements will speak, interact and build new coalitions to take action in order to shape a better sustainable future. The preliminary programs are available online and the registrations are open, even though the Friday is already fully booked.

Some of the witnesses’ cases are already well-known, such as the French Farmer Paul François. In 2012 he won a court case over Monsanto, found guilty of chemical poisoning. His claim was “easier to argue” since he could “pinpoint a specific incident – inhaling the Lasso when cleaning the tank of his crop sprayer-, whereas fellow farmers are trying to show accumulated effects from various products.” Pollution and poisoning cases after years or decades of exposition are much harder to defend, but this ruling has definitely given some hope to victims.

The judges will also hear victims from RoundUp from the USA such as the the former Hawaii coffee grower Christine Sheppard, but also from France and Argentina. In Argentina solely, about 300 millions of litres of glyphosate are used every year, despite the fact that the tragic health issues related to the use this herbicide are well documented.

The health expert Miguel Lovera will be present before the Court as well. Peasants and aboriginal communities in his country, Paraguay, are facing large-scale deforestation, land grabbing and massive use of agrotoxins to grow RoundUp-ready soy and raise cattle. 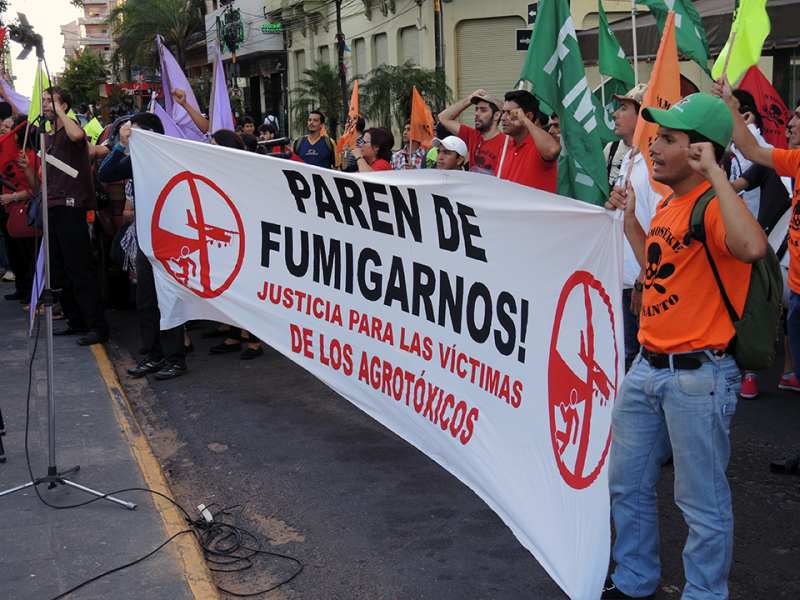 Beekepers will travel from Mexico to present their textbook case and Farida Akhter will tell the real story behind the introduction in Bangladesh of the Bt brinjal, a genetically modified aubergine. How did it really impact the farmers, despite the attempts of the industry to spread pro-GMO propaganda in the media ?

In the last month, the Tribunal has gained a huge momentum, almost doubling the numbers of individual supporters’ signatures on its website. Almost 20 new organisations are signing their support a day and joining “big names” like the ETC Group, End Ecocide on Earth, CEO, Friends of the Earth Europe, Greenpeace International, Regeneration international, Pesticide Action Network, La Via Campesina, MST… However most of the signers are small-scale businesses, farmers, associations promoting agroecology and campaign groups.

They all share the hope that this powerful citizens’ court will make a difference and strengthen the movements and people who fight against the Bayer-Monsanto dirty business.

It is not too late to help the Monsanto Tribunal: