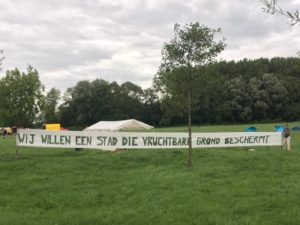 Spanning over the course of the weekend, the field across the way from the threatened Boterbloem farm in Amsterdam Osdorp was transformed into an action camp, organised as a protest against plans by SADC (Schiphol Area Development Company) to build a new business park for commercial companies on these fields. People came from all over to show their support and solidarity for the people of the Luktemeer. Tents were built, signs were put up, food kitchens mobilised, and to welcome everyone into the site a huge message was hung, “ Wij willen een stad die vruchtbare grond beschermt tegen grondbelegging en speculatie“ [We want a city that protects fertile soil against land investment and speculation]. 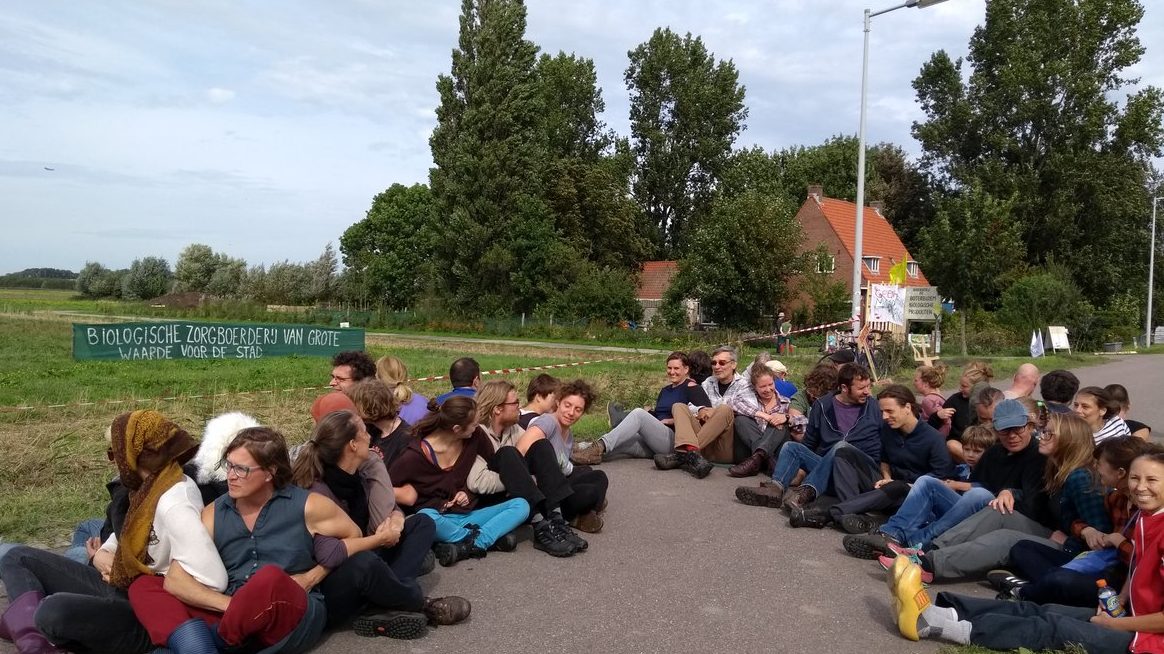 Discussions and Food for Thought

Saturday consisted of a wide range of interesting talks and presentations from people dedicated to environmental and social justice. ASEED presented on our new fossil free agriculture campaign directed at synthetic fertilizer companies such as nitrogen producer Yara who have a base in the Netherlands. Boerenvuur discussed issues related to land and new entrants into farming. Later in the evening Cooperatie Biopolder Luktemeer came together for those interested in producing organic food for Amsterdam in the western part of the Luktemeer. In asking the question what type of agriculture do we want we indirectly ask ourselves what type of society do we want. One that focusses mainly on profit, growth, and seeing nature as a tool to be used, or a society in which we recognise the interdependence of all things and learn to work together as a functioning and healthy ecosystem full of biodiversity? As Eveline Lubbers presented the case of greenwashing among companies, it became clear that “the personal is political”. Here is an organic farm on the verge of eviction, in the name of “necessary” business parks. How is it that companies manage to convince others of the need for new concrete blocks that will destroy good fertile soil? Especially in the case of the Luktemeer, when according to Arnold van der Valk, there are already office buildings with empty spaces in them just minutes away from where the new business park is supposed to be built. To round off this stimulating and motivating day we gathered around an open fire to listen to stories and digest the day’s happenings. In tents, vans and trucks approximately 200 hundred people slept outside. 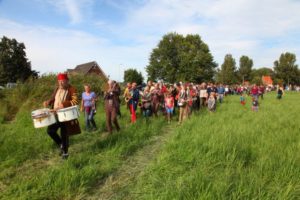 Sunday was the big day of action. Beginning first with a training from the Stroomversnellers, role play examples were given as to how best to sit during a blockade, how to hold your body if the police try to pick you up, and what signals to use for meetings. This was followed immediately by a small blockade to the path leading into the Boterbloem where chants of “Boterbloem moet blijven” [Boterbloem should stay] could be heard. After a delicious lunch and a much awaited performance from De Kift, the whole camp came together and marched to a nearby field. Bags of rye seeds were handed to everyone. The marching procession must have been 400 people or more, marching to the sounds of the brass band. Once we arrived to the field, we assembled and all began to sow our seeds. Sowing seeds of hope, seeds of solidarity, seeds saying the people of De Boterbloem belong to this land and will not be moved! To look around and to see all these people who had come together to resist the building of the business park sent shivers down your spine. The power of people coming together who believe in justice is not to be underestimated. It was clear from this weekend that we sent a sign to those who wish to destroy this land “Wij zijn hier” [We are here]! 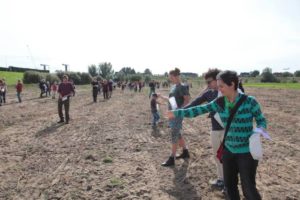 3rd October – the city council are due to speak again on the fate of De Boterbloem and the Luktemeerpolder. There may be a call out for presence at this meeting so stay tuned to hear more. Follow this link to find out which council members you can email to show your concern!