ASEED and friends gathered outside the Tropenmuseum in Amsterdam on the 26th of January, 2016, to inform those attending a debate with Bill Gates of the Bill and Melinda Gates Foundation (BMGF) of some of the projects funded by the BMGF.

Our action was well received! The campaign against false solutions continues from Paris to Amsterdam.

We handed out fliers concerning the projects funded by the BMGF to those attending the event and much interest was also received from passers-by. A student film crew showed up to interview our ASEED spokesperson and Louise Fresco, head of the Wageningen University Board, even recieved some information from us. We hope she’ll make good use of it!

Here’s a link to ASEED’s tweet about today’s action.

Below is our press release:

On Tuesday the 26thof January at 15:15 ASEED and friends will be at the Tropenmuseum to inform all those attending a meeting with Bill Gates of some of the projects funded by the Bill and Melinda Gates Foundation (BMGF.) The panel discussion today is concerned with public health, food security and Nutrition titles ‘From Innovation to Impact’ organised by KIT Sustainable Economic Development, KNCV Tuberculosis Foundation and the BMGF. It takes place from 16:00-18:00.

The BMGF is sold as a philanthropic project, but many of its activities push a corporate agenda and should be seen as a smart investment in Gates’ property. The Gates Foundation pushes ‘Green Revolution’ techniques and Monsanto interests in Africa for example, while Bill Gates himself is a big shareholder of Monsanto’s. This form of agriculture depletes soils, robs people of their lands, makes farmers dependent on fertilizers, pesticides and patented seeds and is a big contributor to the emission of greenhouse gasses.

The BMGF is arguably the most influential actor on issues of global health and agriculture, and distributes more aid for global health than any government. However, many of the projects funded by the BMGF negatively impact small scale farmers, local people and food sovereignty.

Due to the pervasive and influential nature of the BMGF, western companies are granted the opportunity to greenwash their activities. An example of this is the so called ‘Green Revolution’ in Africa that is concerned with profit-based, corporate-led farming rather than farming that benefits local people and small scale farmers. AGRA Watch is grassroots, Seattle-based group challenging the Bill and Melinda Gates Foundation’s questionable agricultural programs in Africa, including its Alliance for a Green Revolution in Africa (AGRA).

The Alliance for a Green Revolution in Africa (AGRA) (of which the BMGF is a major donor) represents the interests of biotechnology corporations rather than small scale African farmers. According to a report conducted by Young Friends of the Earth International, ‘the bulk of projects funded by the Gates Foundation and its brainchild AGRA favour technological solutions for high-input industrial farming methods’ including ‘patented seeds, fertilizers and lobbying for genetically modified crops,’ all of which impact negatively on local people and food sovereignty.

This is evidence of the fact that global health and agriculture are two areas that continue to be monopolised and corporatised by the BMGF under the guise of charitable philanthropy.

Not all projects funded by the BMGF are bad, however. According to a report conducted by Global Justice Now, the trend demonstrated by Gated Development ‘to involve business in addressing poverty and inequality is central to the priorities and funding of the Bill and Melinda Gates Foundation.’ Global Justice Now argues that this highlights the corporate agenda that the BMGF is concerned with, stating that ‘it is far from a neutral charitable strategy but instead an ideological commitment to promote neoliberal economic policies and corporate globalisation’ wherein big business directly benefits within the fields of agriculture and health.

Gates has approximately 500,000 shares valued at 23 million US dollars in the notorious GM Company Monsanto; a company that has a history of blatant disregard for the interests and wellbeing of small scale farmers around the world. Monsanto does not create technology and then share wisdom with farmers; instead the company patents its genetically engineered seeds and thereby claims monopolistic ownership over them; this is then used to punish small scale farmers. Monsanto also supports intense industrial agriculture combined with the promotion of the use of chemical fertilisers; both of which severely damage soils and frustrate agroecology. Gates’ involvement with Monsanto stands as proof to his double agenda.

Monsanto is concerned with profit, not people, and the involvement that the BMGF has with Monsanto in terms of support and funding should not go unchallenged.

It is therefore evident that BMGF is involved with monopolising and corporatising health and agriculture globally. Their involvement in an event concerned with health, food security and nutrition should therefore warrant serious concern. 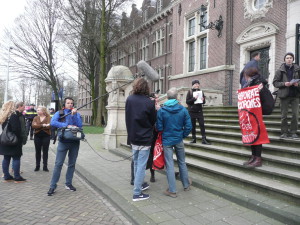 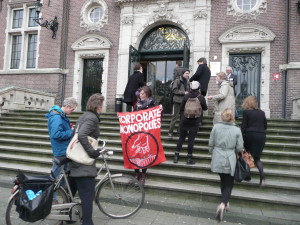 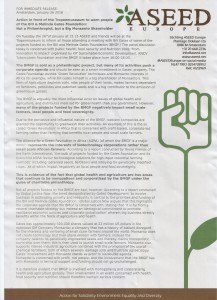