While many celebrities are willing to simply use their name to promote a fashionable cause (and, of course, to promote themselves) without seriously engaging with the issue at hand, Neil Young has a long history of directly confronting injustices. He is the co-founder of Farm Aid, which works to support small-scale farmers threatened by agribusiness giants and last year he made a $100,000 donation to help the state of Vermont fight it´s GMO-labelling lawsuit. His most recent albums, ¨The Monsanto Years´ and ¨Earth¨ have strong anti-corporate messages, touching on issues including global hunger, pesticides, GMOs, seeds, and ecology. These songs are intended to act as springboards for action; an invitation for the listener to do something to stop wanton corporate destruction of the commons. To effectively resist though, we have to be informed. This is why Neil recently launched a website (http://goearth.org/) to help people engage with grassroots activists, alternative media, and stories of sustainable living and social justice in practice to showcase those who are working at the frontlines to try and secure a more liveable planet for all.

A logical extension of this is the ¨Global Village¨ which has accompanied Neil Young and his band, Promise of the Real, on their US and European ¨Rebel Content¨ tour over the past year. At his European shows, the Global Village has been coordinated by Beyond GM, a campaigning group working to keep GMOs out of farms and food. The idea is to create a platform for grassroots activists, local to each show, to set up a tent in order to engage with an audience typically out of reach under one of six themes: GMOs, Earth Ecology, Energy & Climate, Global Justice, Future of Farming, and News You Can Trust. 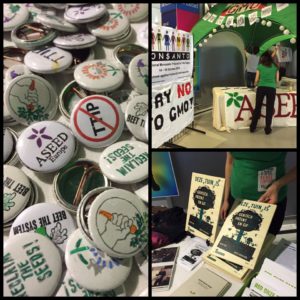 As part of this, ASEED was invited to host the anti-GMO tent at Neil´s concert at the Ziggo Dome in Amsterdam last week. Other organisations from around the Netherlands included the Transnational Institute (Global Justice), Bont voor Dieren (Earth Ecology), Fossil Free Culture (Energy and Climate), De Groene (News You Can Trust), and CityPlot (Future of Farming). Given Neil´s fierce criticism of Monsanto, ASEED happily took the opportunity to inform and involve concert-goers on the upcoming Monsanto Tribunal in The Hague this October where the agribusiness giant will face charges of ecocide and crimes against humanity in a prefigurative court setting.

Hosting a stall at such a major event with around 17,000 attendees provides an opportunity for small groups to spread their message beyond the echo chambers of social media. Though there are inherent limits to the effectiveness of flyering, especially when there is the distraction of beer closeby, it is clear that if meaningful change is to be made concerning the issues with which these groups are engaged, then they must enter the popular consciousness to a much greater degree than is currently the case. It´s only by reaching out, as Neil Young has done throughout his musical and activist career, that we can build a strong enough resistance to the pervasive corporate greed which threatens us all.

Here´s a quote from Neil following his record 3 and a 1/2 hour performance last Saturday:

”Over the last year, we, on the ‘Rebel Content’ tour, have been very fortunate to be accompanied by 100s of grassroots activist groups. These regional and international groups have been doing heroic work on the front lines, getting people informed, engaged and excited about protecting earth and all its inhabitants. We can never be thankful enough for their participation.”