Since September 2019 we have started with the ASEED bi-monthly themes. September, October and November have been the months of the theme Direct Action (we did three instead of two because we felt we needed longer with this broad topic). Now that it has come to a close and a new theme is on the horizon, we decided to write a little piece to look back on the past three months.

September was a month full of action. Starting on the first of September, ASEED’ers alongside We Squash, Code Rood, Extinction Rebellion, gardeners, local residents and others, resisted the eviction of the Lutkemeer community gardens. We stood up to make a statement against the municipality. We showed that we will not stand for the commercialisation of more green space and farmland within Amsterdam’s municipal territory . We resisted for nearly 12 hours but in the end we were pushed, dragged and carried from the polder, due to our small numbers relative to the large repressive police force which was dispatched to evict us. 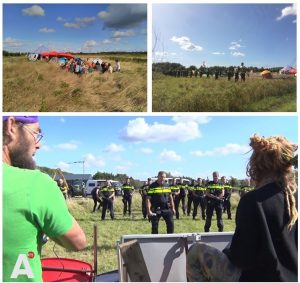 Six activists spent a couple of nights in police stations around Amsterdam. But the fight is not over. One week later we marched through the streets of Amsterdam with 200 people and more groups to deliver our four demands to the municipality. 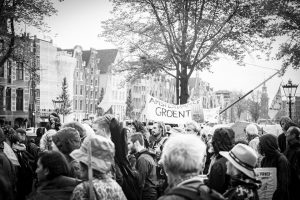 Despite our actions construction companies started clearing the land and digging dykes, to cut off the traditional canal patterns and farmers access to the land. But all is not lost. Due to legal action taken in courts by Behoud Lutkemeer and smaller decentralised actions on the ground, construction has stopped until at least Autumn 2020. Bridges have been dug up by activists, cameras have been removed, garlic has been planted and we look forward to more fertile resistance in the months to come – the next demo is already on Sunday the 8th of December! 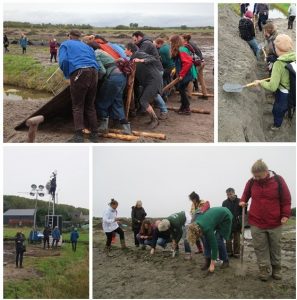 Then our long anticipated mass action, Free the Soil came in mid-September. On the 18th of September we traveled to Brunsbuttel, Germany to shut down the YARA facility. This was the first mass action targeting the nitrogen fertiliser industry in Europe. We will continue to expose the corporations responsible for the climate crisis in the agricultural sector in the coming year. Read more about the camp and the action here in English or in Dutch. The Free the Soil collective continues to reflect on this mass action and plans on organising more actions in the coming year. 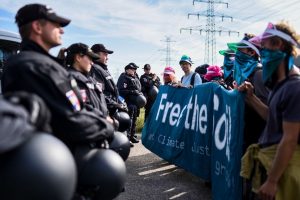 Following these two large direct actions in one month we were pretty tired. Therefore, for the following month and a half from mid-October to the end of November we focused on attending actions of other groups while hosting our own discussions, reading groups, documentary screenings, Local Conference of Youth (LCOY), as well attending the Free the Soil plenaries and a study session on youth activism in Europe. These were, by some coincidence, mostly connected to the topic of direct action. We have extracted quotes from our reports on some of these events to give you a taster of what was discussed. 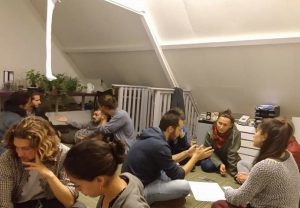 “…since it is not very clear what counts as non-violent and violent behavior, approving one or the other tactic as ‘the way to go’ is maybe not desirable. This very dichotomy is maybe not helping us out in the  end.”  — Katie

“Each of us must find our work and do it. Militancy no longer means  guns at high noon, if it ever did. It means actively working for change,  sometimes in the absence of any surety that change is coming. It means  doing the unromantic and tedious work necessary to forge meaningful  coalitions, and it means recognizing which coalitions are possible and  which coalitions are not. It means knowing that coalition, like unity,  means the coming together of whole, self-actualized human beings,  focused and believing, not fragmented automatons marching to a  prescribed step. It means fighting despair.” – Audre Lorde”

Read more here or listen to the podcast.

“…we continued the discussion in smaller groups, where we also had to come up with solutions and different forms of support systems – for mental health issues – that we can make in activist groups. Some of the suggestions where:

There was also a reading group on environmental justice & indigenous resistance, a discussion on diversity of tactics and climate justice rhetorics, a series of documentary screenings and discussions hosted by the RICO collective on Guatemala’s indigenous resistance and genocide, Free the Soil plenaries in Denmark and a talk on Dismantling industrial agriculture for climate justice at the Local Conference of Youth (LCOY). These and many more moments gave us a constructive period of reflection after some intense actions. Moving between practical experience and theory generated some key lessons:

We will finish this theme on the same quote we started with in September,

“We call to continue and increase the resistance in all the  different struggles, because at the the end all the struggles are one.” –  Make Rojava Green Again