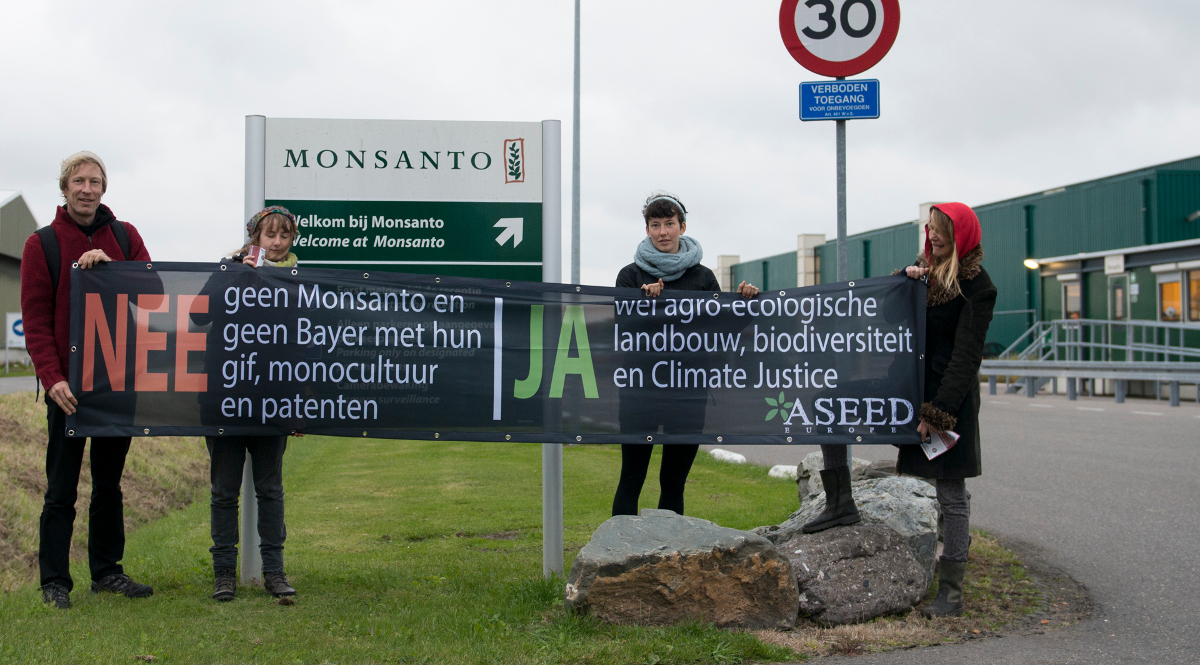 On Wednesday 12 October, activists from ASEED, along with allies, paid a visit to the Bayer offices in Enkhuizen, Bergschenhoek, Wageningen and Mijdrecht, carrying banners with a text based on the yes-no sticker:

“Nee, no Monsanto and no Bayer with their poison, monocultures, and patents

Enkhuizen:
In Westeinde, just outside the old centre of Enkhuizen, five ASEED activists positioned themselves next to the Monsanto entrance with their banner. A couple of years ago Monsanto acquired the seed company Seminis. The manager Cees Deen was kindly answering to the activists, but in terms of pesticide use, patents and market concentration a pronounced difference in opinion remained. Another employee indirectly expressed some sympathy with the activists: “I am from the department of vegetable seeds and that is not so bad.” 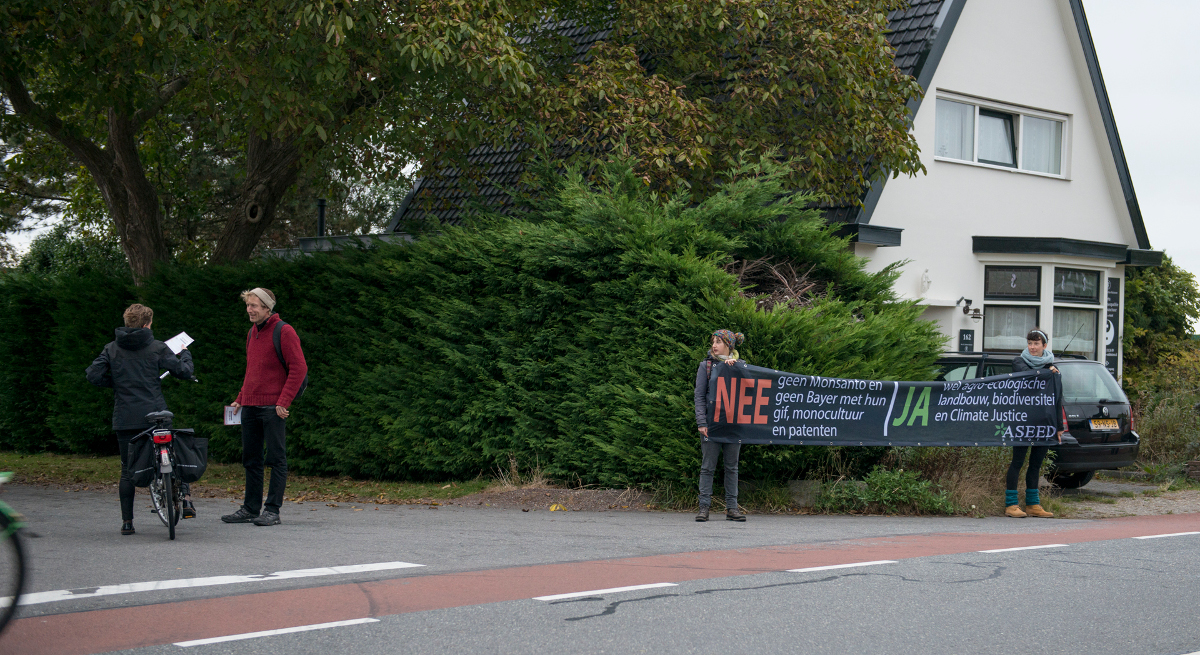 Along their way the activists shortly stopped over at Syngenta, located only a few hundred metres further. Syngenta is another global company that deals in pesticides and seeds. It was recently taken over by the Chinese chemical giant ChemChina. 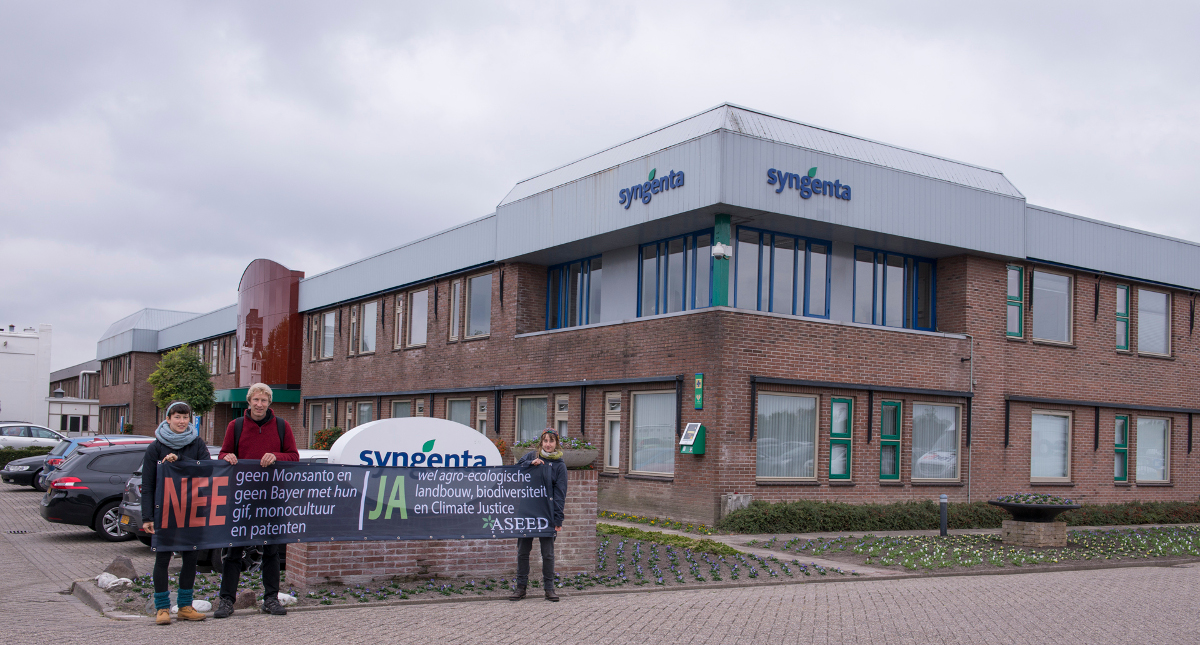 Wageningen:
Monsanto’s research department is located in Wageningen. As soon as the activists arrived with their banner, staff members came outside to take pictures. Apparently they were very pleased with the attention paid to their company. 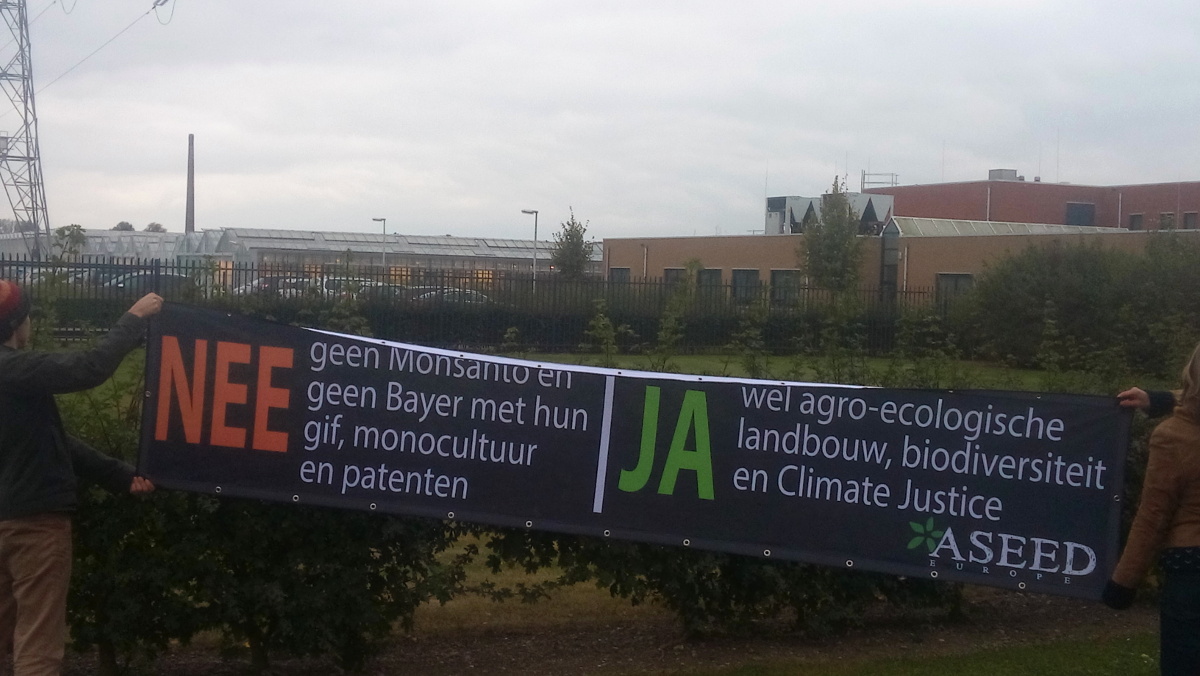 Mijdrecht:
Monsanto in Mijdrecht? Not quite, but the Dutch headquarters of the chemical company Bayer are based in Mijdrecht and Bayer recently bought Monsanto; which is why they were also honoured with a little visit. Here, police arrived and arrested two activists, but they were released shortly after. 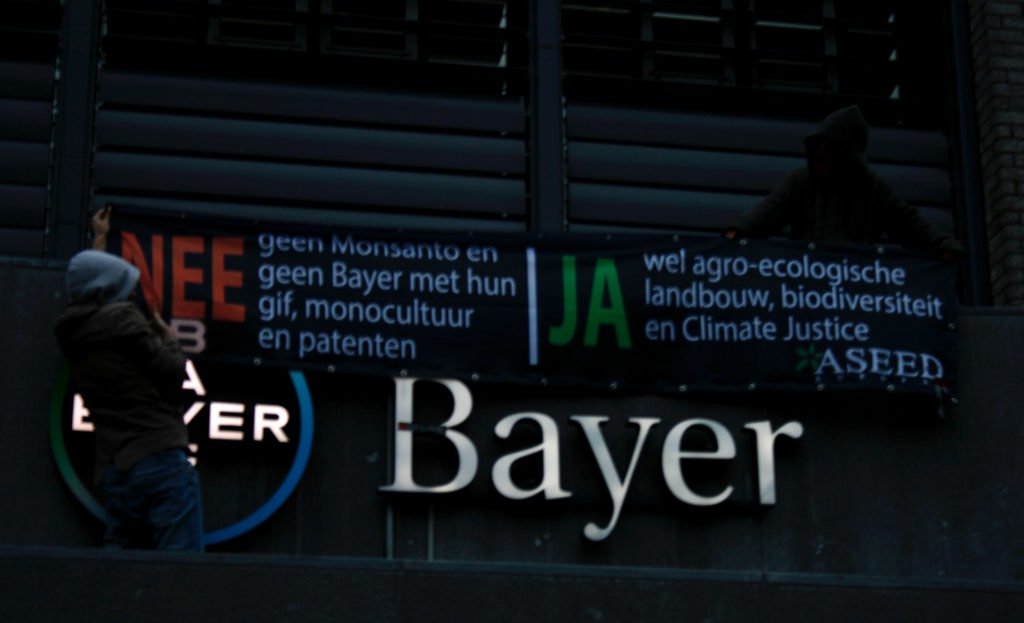 Bergschenhoek:
Also in Bergschenhoek a banner was hung. Information and pictures will follow soon.

The Monsanto Tribunal in The Hague will take place from 14-16 October:
Retired lawyers and judges will examine the polluting and exploitative activities of this big chemical company in the light of national and international law. Monsanto is an internationally renowned and notorious company that is a symbol for deficits and drawbacks in agriculture on a global level. After numerous Marches Against Monsanto many people know about the lawsuits concerning corn and rapeseed in their home-base, the United States, or concerning deforestation and expulsion and displacement in Latin America due to their soy. Also, lawsuits concerning suicides induced by unfair contracts pertaining to cotton seeds in India are well-known. All of this will be investigated during the tribunal.

Lesser known is the fact that Monsanto also became a dominant player in the Netherlands by having acquired big vegetable seed companies during the last few decades. Monsanto is thus also a problem in the Netherlands. The company bought the giant vegetable seed companies Seminis in Enkhuizen (Noord-Holland), De Ruiter Seeds in Bergschenhoek (north of Rotterdam) and Western Seed in Westland. The company controls a global market share of 14% in vegetable seeds, for agriculture seeds its market share amounts to 29%. And these are general figures, for certain crops their share is way higher and in a few cases there is almost no alternative to Monsanto seeds anymore.

The acquisition of Monsanto by the chemical giant Bayer doesn’t make things any better. Also Bayer has been active in the Netherlands for years and owns, for example, Nunhems, a big seed producer and breeder in Limburg Nunhem. And the headquarters of Bayer in the Netherlands are based in Mijdrecht, just below Amsterdam. Together, Bayer and Monsanto control a global market share of 28% in vegetable seeds.

At ASEED we don’t need to wait for the outcome of the tribunal. We already know that Monsanto is involved in highly objectionable and harmful activities. Our own moral ethics are more important than international laws and regulations in forming our opinion. Monsanto’s primary activities come at the cost of humans and the environment. The company is so large and powerful that it is difficult for communities to oppose it. Therefore, ASEED has been campaigning against Monsanto in the past few years. And we will continue, regardless of the outcome of the Monsanto tribunal. Bye, bye Bayer!

For everyone who’s also had enough of Monsanto, Bayer and industrial agriculture, we produced stickers with the same message