“Indigenous resistance is not a one-time event. It continually asks: What proliferates in the absence of empire? Thus, it defines freedom not as the absence of settler colonialism, but as the amplified presence of Indigenous life and just relations with human and nonhuman relatives, and with the earth.” – Nick Estes

Last month’s reading group was on Indigenous resistance. We read Chapter 1 from As Long as Grass Grows: The Indigenous Fight for Environmental Justice, from Colonization to Standing Rock

by Dina Gilio-Whitaker. Next to that we read the first 2 chapters of Our History is the Future: Standing Rock versus the Dakota access pipeline, and the long tradition of Indigenous Resistance by Nick Estes. The chapter by Dina Gilio-Whitaker focusses primarily on what environmental justice means in a legal context within the U.S.A. It shows how limiting a concept of environmental justice can be for the problems in the ‘real’ world. The text by Nick Estes was more describing different forms of resistance by Indigenous people and the oppression/problems they were/are facing while doing it. 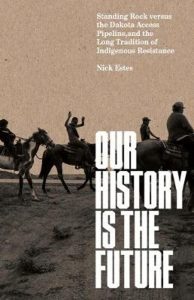 An especially interesting point which was mentioned by a participant of the reading groupwas Nick Estes non-chronological writing style. Nick Estes advocates that Indigenous resistance has been happening already for a long time, yet offers much inspiration for current (non-indigenous) resistance. He argues that the future and the past should not be seen as separatebecause they are incomparable. His writing style mirrors this idea. Namely, he tends to go back and forth in time in his text itself, which clearly shows how his theory also influences his style of writing.

An interesting example, was his view on the #NoDAPL movement and his own experiences. #NoDAPL stands for No Dakota access Pipe line and was a movement which tried to prevent the toxic pipeline project from ruining (indigenous) land. During these protests “in its best moments, #NoDAPL showed us a future that becomes possible when everyday native people take control of their own destinies and lands, while drawing upon their own traditions of resistance.” For Nick Estes these protests thus should also be seen as examples of how one can and should live in a constructive way. In these camps both indigenous and non-indigenous people were fighting against a horrible project, but also lived in a respectful way with each other. Nick Estes does not solely present ways of resistance in which all non-indigenous people are excluded, but shows interest in collaboration with non-indigenous people and argues that this can be vital.

During our discussion, this brought up the topic of nationalism in order to overrule the colonial. To what extent is a certain nationalism or collective identity needed to overthrow colonial power? On the one hand we need a collective identity to get together and to fight against colonial oppression, on the other hand we do not want to exclude people in participating in this fight. Inspired by Franz Fanon, one participant mentioned that a certain nationalism is needed to overthrow a system, but once this is achieved we should be very critical of this same nationalism. Another participant argued that nationalism is never okay and that it should be about reclaiming the cultures and then sharing them with others, not making them exclusive for a specific group of people. 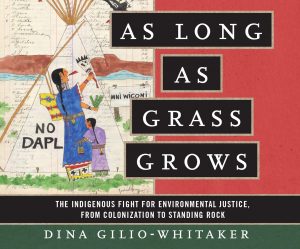 Further, during the reading group there was a comparison made between the indigenous struggles, which have been described in both texts, and European indigenous struggles. It is important to emphasize that these struggles are very different from each other. Whereas in a context of the Indigenous people in America for example rivers, nature and people’s lives are at stake, but in Europe it is sometimes about preventing languages getting lost.

Once more, we had an inspiring reading group in which all of us could learn about indigenous resistance in general and about the standing rock case in particular. As last time, colonialism and capitalism seemed to be core issues of our conversations, core problems which were perceived as origins on environmental injustice.