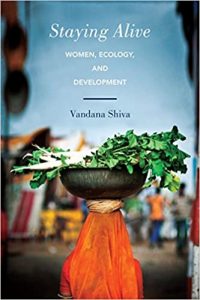 „With the violation of nature is linked the violation and marginalization of women, especially in the Third World. Women produce and reproduce life not merely biologically, but also through their social role in providing sustenance.“

This chapter from Vandana Shiva’s book called Staying Alive tackles the relationship between women and nature. More specifically it talks about the link between nature and women in terms of reproduction and “giving life”,  as well as being oppressed by patriarchy and exploited by economic developments.

One point which we discussed quite elaborately was Shiva’s contrast between the invisibility of nature’s work and the visible work of capitalism. Since industrialisation, nature has increasingly been perceived as input and resource and not as a source of wealth and sustenance, neither was women’s work in sustenance perceived as productive work. The productive power became associated only with male western labour (Vandana Shiva, 1989). We agreed that the devaluation and de-recognition of nature’s work led to the ecological crisis we are facing today whereas the de-recognition of women’s work has created sexism and inequality between women and men.

Furthermore we talked about the role the media has in reporting about the current ecological crisis. We mentioned the Amazonian forest example, and  a member of the reading group shared the example of the cross-island line cutting through the central catchment reserve in Singapore. We questioned the unfairness of how some ecological problems are prioritized over others because of the coverage they have, and felt helpless because the source of our information remains in the hands of mass media because we ourselves are so disconnected from nature itself.

Throughout the reading group, we couldn’t help but be conscious about how we are privileged women, very different from the women from local communities with indigenous knowledge who are currently resisting against the destruction of their environment.

Furthermore, we discussed our possibilities as citizens in the fight against those neoliberal structures which we perceive as the origin of the domination of women and nature. We agreed that the trend of “conscious consumerism” is lacking, because there is the illusion of choice, and it is the wider system that needs to change. However, there is much value in making the right choices whenever we have the financial capacities to do so, such as living vegan, buying organic, seasonal and local, boycotting certain brands, growing your own food, etc. There was also some hope that there are already many possible solutions, and we just need to keep demanding alternatives, not just through individual consumption but as collective movements. We also talked about the possibility of change, whether people or entire countries. The example of how China was able to dramatically reduce smog during Beijing, and the New Deal during the Great Depression all shows that systems can change quite dramatically quite quickly.

In the end of the chapter and also towards the end of our reading group we talked about Gender ideology vs. the recovery of the feminine principle. We agreed among each other that  „masculine“ and „feminine“ categories are socially and culturally constructed. The western concept of masculinity that has dominated development and gender relations has excluded all that has been defined by culture as feminine and has legitimized control over all that accounts as such (Vandana Shiva, 1989). There are several gender based responses to the process of domination and asymmetry:

First, Simone de Beauvoir accepts the feminine and masculine categories as biologically established and the status of women as the second sex. By that her idea of liberation happens by women being free to assume masculine values, yet agreeing with the masculine being superior. The process of liberation is thus a masculinization of the world defined within the categories created by gender based ideology. Overall it seems like de Beauvoir accepts the patriarchal organization of women as passive, weak and unproductive.

In opposition to de Beauvoir’s perception of liberalization, many scholars see the answer in the feminization of society. Some scholars still stick to a male, female categorical approach, just with feminine characteristics becoming more dominant in society, others recognize that these dichotomized categories are based on exclusiveness thus need to be eliminated. This means that in this non-gender based philosophy the feminine principle should also be encouraged and become more dominant, however, it is not exclusively embodied in women but in men, women and nature as a more fluent, creative process. Vandana Shiva writes that „this perspective can recover humanity not in its distorted form of the victim and oppressor, but by creating a new wholeness in both that transcends gender because gender identity is, in any case, an ideological, social and political construct.“ The strong desire of recovery of the feminine principle is also a response to multiple dominations and deprivations not just of women but also of nature and non-western cultures.

We agreed that it’s extremely important for feminists not to play “catch up with men”, and compared ecofeminism to liberal feminism. We also touched on the fact that this was written so long ago, and despaired because authors like Shiva were already calling it the crisis it is, and yet we are only now finally starting to see the urgency. There were also some comments over the criticisms leveled at ecofeminism and Shiva’s work. We thought that it is perhaps the language that does not sound intersectional enough, because Shiva does recognize the fluidity of gender in her arguments. We also felt that the ecofeminist literature remains quite western, with very few asian representatives beyond Shiva herself.